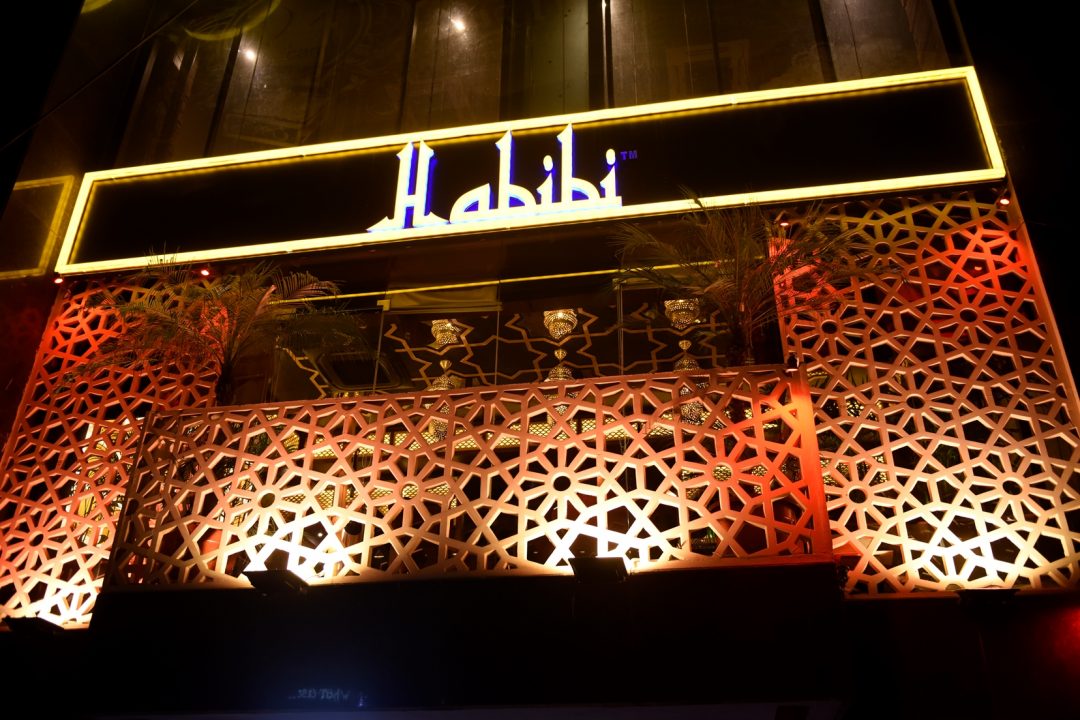 Now its time to get the hang of Lebanese & Arabic Food at none other than Habibi at Rajouri Garden where you can find a blend & fusion of Lebanese, Moroccan & Indian cuisine. Situated between the hustle bustle of the Rajouri Garden market you see this amazing restaurant in yellow lights and when you enter you can see a big TV playing FTV (Habibi is a trademark of FTV). The ambience is that of an authentic Arabic luncheonette. You can see Arabic lamps and Arabic women caricatures dancing on the wall. A beautiful Arab touch is given to the place with the music being Arabic as well. Habibi is spread across 3000 sq. ft. with a capacity of more than 200 guests and an interactive kitchen where Chef Amanjeet Singh works with all his zeal & enthusiasm. There is also a well stocked bar & a designated smoking area offering a relaxed lounging experience to the guests with live performances by artists showing the tanoura folk dance on the song Jugni making use of his colourful costume & skills. You can feel the magic here on weekends during the live performances like tanoura dance, dhol night or belly dancing which is indeed mesmerizing. They also have signature hukka (sheesha) available in flavours like coffee, cardamom, cognac, passion fruit & many more. It’s a must stop junction for everyone with the wines, beers & hookahs plus the enthralling music, you are sure to love & enjoy. I went here for The Tagine & Hukka Festival which happened from 24th to 26th June. Indian people have started developing taste for Arabic cuisine as well. So there is more reason for experimentation says Amanjeet Singh, a 24 year old chef & young enthusiast full of energy & life.

Chef Amanjeet Singh is most well known for his daily appearances on Good Chef Bad Chef however there is more to his career. Unlike many chefs, Amanjeet hadn’t always dreamed of being behind the pots and pans. In fact, cooking was used to pay for his karate lessons, as he wanted to become a martial artist. However, this dream didn’t last long, as he suddenly found his calling as a chef. He began his illustrious career as an apprentice chef at Chor Bizarre in Old Delhi, Delhi’s well-known restaurant for Kashmiri food. Then he put his foot in Hyatt Regency Hotel and from there to Holiday Inn group. Thereon Chef Amanjeet became a part of many new pre-opening restaurants with many new different concepts and food. Now what is Tagine? Tagine is basically a conical cooking utensil to make chicken, veggies, rice or stew. It is made with a Moroccan clay material. Habibi doesn’t use any beef blood (due to the Indian laws) but they have charcoal infused inside the tagine in a glass to give flavour to the Arabian Tribal food. Aman thinks that it’s a delight to serve this kind of mild flavoured cuisine to customers and he also has the spicy version for those who love their Peshawari chicken & mughlai Punjabi food. So no one gets upset on the taste meter. Starters like the Mezze Platter & Fatayer are most in demand here and Chef Aman uses Arabic home made spices to prepare the food & make it flavourful. Don’t be surprised if you spot any page 3 personality or any Bollywood celebrity here.

We started with Cucumber & Mint Lemonade which had a cucumber slice on top with fresh mint, lemon, cucumber and fresh lime water. It was totally refreshing and gave us an instant boost. Garden Fresh had fresh orange & lemon chunks with peach & topped with lemonade. This was better than the lemonade due to the sweetness & tanginess of oranges. A zesty drink! Then we tried Spinach & Cottage Cheese juliennes sprinkled with sumac along with Hummus, Moutabel & Baba Ghanoush served with Lavash. They were nice and had a soft filling of spinach with a fresh cottage cheese blend. A classic dish for sure. I loved the dips and the hummus tasted really good. From the Manakish {Arabic Pizza}, we tried Samac. Samac means fish in Lebanese language. The Manakish had minced fish in tomato sauce with Arabic five spices on a thin crust base. The Arabic flavoured fish tasted great & spicy. Very different! Coming to the tagines, we first tried Grilled Veg. Tagine which had grilled Moroccan marinated vegetables braised on slow flame and served with herb rice. The veggies were sweet and had an Arabic touch to them tasting good though a little heavy. The Soy Tagine had grilled Moroccan marinated soy & vegetables cooked on a slow flame served with herb rice. It was made with mint sauce & Arabian spices with juicy soy pieces. The rice were flavourful. Loved this one! Karanfil Tavuk had chicken cooked in ancient aromatic smoking style served with potato mash mixed with Arabic flavours. It had a very nice & rich flavour of chicken. The chicken served here is of superb New Zealand quality which made the dish more lovely. The juicy chicken was indeed special & a delight. Must try! In the breads, we tried Plain Khubus which was very different, soft & fluffy. Khabus is basically a traditional Arabic bread cooked in clay oven. The Dry Fruit Khubus had a stuffing of dry fruits and again one should not miss this. It’s superbly delicious. Coming to the desserts, we tried Baklava which were filo sheets cooked in oven till crisp stuffed with semolina pudding. It was nice, crisp & perfect. The Sponge Bob Balls in Green Apple flavour had sponge cake balls dipped in flavourful essence & dark chocolate. A little bitter but nice! The Basbusa is a Arabic tribal dessert made from Arabic coconut flavoured sweet cake which is baked & sweetened by flavourful sugar syrup. It was very nice & different. I had never tried this one earlier and it tasted great. The Chocolate brownie was at it’s best! Lastly we tried the vodka flavoured Ruz Bin Hali, an Arabic rice pudding flavoured with rose/saffron. It had the fumed flavour of the special FTV vodka & gave a perfect ending to our meal. For the people who don’t like garlic, they have non-garlic recipes too. We also tasted the lamb curry which Chef Aman took several days to make. It was made without onion & garlic, a pure tomato based curry. I could simply feel from the taste how much time has gone into making it with no compromise in quality. They are serving the best to the guests and with more & more people especially youngsters liking Arabic cuisine it’s a dramatic change in tastebuds and as far as experimentation, lots can be done to develop the newly changing tastebuds of young & enthusiastic customers.

So why don’t you come here & try what you have been missing and when you like the Arabic, Moroccan & Lebanese Mix with Indian fusion do come back for more at Habibi always blooming & blossoming with starry nights which add more colour to the mesmerizing regal décor & theme. 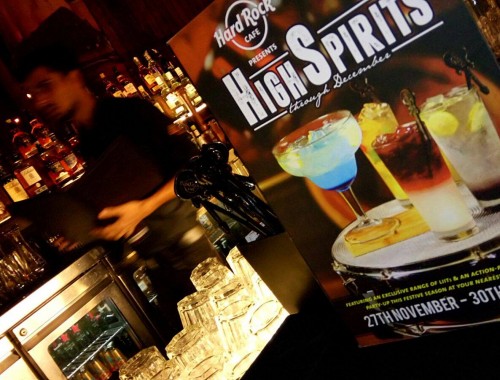 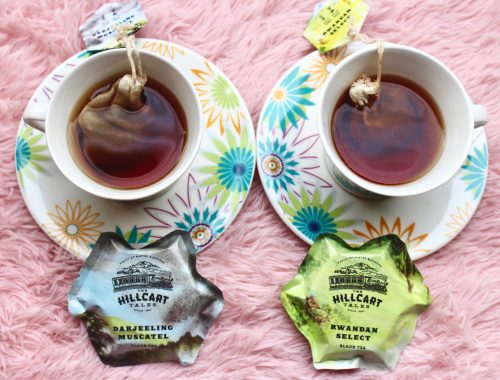 The Hillcart Tales for the Tea aficionados 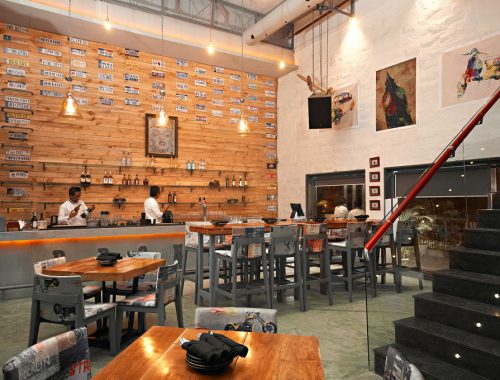